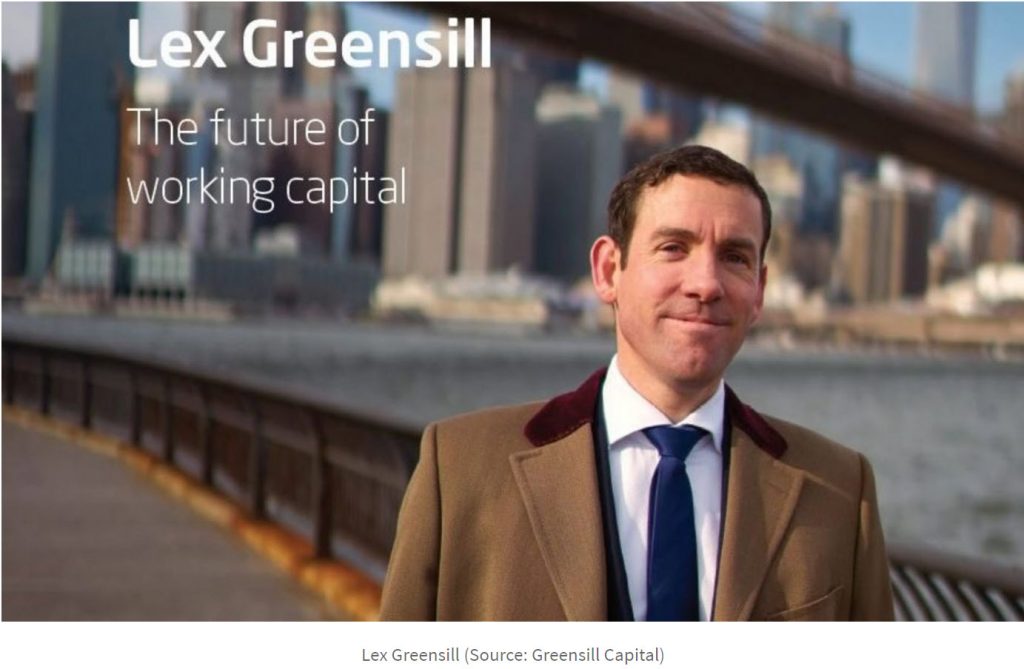 For more insights on the implications of Greensill’s downfall, I’m turning this post over to my friend, and former colleague, Peter Lugli.  Peter is an expert and pioneer in supply chain finance (SCF), multi-sided marketplaces, and payments–and he’s wickedly funny, as you shall see.

Post-Greensill: Show me the Bacon

Finger-pointing in our little world of SCF is playing out under the white-hot glare of the Financial Times, Bloomberg, and Wall Street Journal. Wow. Say what you will about Lex Greensill, but boy did he give the chattering classes something to chew on.

There are important learnings to be had in the eponymous Greensill Bank saga. (Beyond learning what eponymous means.) Weeks from now, when the dust settles, and we return to the expert blog commentary and illustrious Global Finance SCF awards, practitioners and students of the space are going to detect fragility in business-to-business financial schemes – and mitigate their risk.

I worked with Lex and his Morgan Stanley team in my PrimeRevenue days in the mid-2000s,  the salad days of SCF. Somewhere in my archive of job trinkets is a CD-ROM supplier enablement program mailer that was built for a major UK corporate’s SCF program. “[CD folder cover]: Your cheque is no longer in the post… [CD-ROM disc] It’s in here!”.  Lex ponied up Morgan Stanley dollars to get hundreds printed out and airlifted, pronto, to that corporate’s suppliers. Nothing like ‘supplier enablement’ had been done in the nascent SCF industry before, and it was a blast.

Fast forward to a decidedly post-CD-ROM world and an evolving story. Somewhat understated from leading financial publications is the real impact a severing of Supply Chain Finance is having on real businesses and real people. It’s hard to imagine discussion in certain steelworkers’ break rooms and kitchen tables these days in Scotland or Australia. Or those of suppliers to those mills. But we do hope those who are creative in optimizing cash cycles will be as creative in saving businesses and jobs.

Here are some takeaways, based on the perspective of a student and former practitioner. They may be all wrong. Several may be fiercely debated because, for some reason, this space brings a lot of passionate people.

1. The Greensill Bank program failed due to the structure’s fragility. It’s not an indictment of the SCF business model. Though it garners scrutiny given the actors involved (Softbank! Greensill! Tokio Marine! Gupta! Cameron! Apollo! BaFin!) and indicia of hubris (four private jets!), the fundamental bargain at play with Supply Chain Finance remains sound. That is, if a business is financially solid, it can leverage that to the benefit of its supply chain for mutual cash flow flexibility and advantage. A buyer of goods and services gets to pay its bills at a reasonable term (to permit internal accounting procedures such as ‘three-way match’ to take place before disbursing funds), while at the same time the Supplier to that Buyer can get paid much sooner if they so choose, at their customer’s cost of financing. Third-party funders can assess the risk of the relationship and advance funds. Technology players can streamline things so invoices get approved faster, and communications between all players can be streamlined, so you achieve this instead of this. So long as there are open account payment terms in B2B, there will be friction in payment flows that can be optimized. SCF definitely offers the promise of a win-win-win (we used that a lot in the day).

2. Investment-grade corporates won’t have a problem pivoting to a new provider and funder. Non-investment grade corporates in the Greensill Bank (GB) structure may have a harder time. We’ve already witnessed the reported quick-pivot work with Taulia and Chase involving an unnamed former GB obligor. Funding good risk isn’t going to be a problem. This is a very attractive asset class, with very short tenors (that 90 or 120-day payment cycle). Back in the day, we used to say to banks and ‘funders’ providing liquidity to SCF programs that it was a great investment, because, particularly in a multi-bank financing arrangement, you could come in and get out quickly to suit your risk appetite with a known customer. SCF was like the Waffle House of corporate banking. Nothing overly memorable, but quick and satisfying at the same time, and got you going in your day. It left you with the smell of bacon all day, but hey, it’s bacon! Alas, when SCF is dished out with a single bank, and with an obligor with less than stellar credit, well, as we’re about to see play out, it can be a Rolaids moment. (Oh, and this writer is paraphrasing. We didn’t really go with the Waffle House analogy. Our sales guys were way more polished than this.)

3. Putting these programs in place may be hard. Unraveling them entirely will be much harder. Sure, the PowerPoints and Excel value analyses are promotion-inspiring but getting these SCF programs off the ground is hard. Are we about to learn that unraveling them may be harder? What happens if you’ve got a term extension rolled out in parallel to your SCF program, and now you’re at 120-day payment terms or more, you used to be at 60 days, and your Suppliers are now used to getting paid on day 10? For 80% of your COGS? And suppose your SCF provider and funder – or both – bail? Because, wait for it, the credit insurance provider bailed. And you’re on the edge of investment grade. Hmmm indeed.

It’s going to take a lot more concentrated work to get your supply chain righted if you leave SCF. That includes a rollback to a payment term pre-SCF (60 days) as it’s likely your suppliers thought the bargain here was payment on day 10 for a discount fee (which they’ve probably already baked into your price, by the way, over time) in return for your payment term extension. So that DPO target you worked so hard to achieve gets dinged. And for some suppliers, who may sniff riskiness, they may be asking for shorter payment terms, or (gulp) payment in advance of delivery in the harshest of cases. We will likely witness a lot of angst and uncertainty unraveling these programs.

It behooves Treasury as well as Procurement leaders in big corporates exploring SCF to dig deep into the structure of complicated programs such as those unveiled by GB if they’re offered. It’s ridiculous to think Greensill was alone in securitizing and tranching receivables – it was very much seen as the next thing in SCF. Above all else, it sounds like hard questions need to be asked if there’s a trade credit insurance provider involved in the scheme. Thanks to GB, we do have the benefit of learning more about trade credit insurance (“Yes, those Irrevocable Payment Undertakings (IPUs) are insured!”), and trade credit insurers (“Ohhhh…. those IPUs! Sorry we thought you meant something else, we can’t help you, go away…).

4.  Watch out for the cops. Regulatory turrets have been increasingly trained on the SCF space. For the past couple of years, Australian regulators have made a lot of noise about picking on suppliers and accounting treatment (ah, accounting treatment!). But the word’s out that the SEC is making inquiries again in this space, too, to get a sense of how many US SCF programs are in play. Not hard to see why. Tens of thousands of workers in hard-hit industries who command hundreds of thousands of votes in swing ridings and constituencies are facing the prospect of job loss at the hands of financially tenuous firms having deployed fragile SCF programs to prop up cashflow. It’s an open question whether the moment SCF is having is going to goad the cops into action here.

Stay tuned. More to learn in the days and weeks ahead.