Hollywood’s Content Wars: Who is Managing All of That Spend?

Content wars are raging in Hollywood.  Netflix, Apple+, Amazon, Disney+, Hulu, etc are battling for our eyeballs, especially now that we stuck at home. (Netflix added 15 million new subscribers last quarter!)  In 2019, the industry spent $120 billion producing original content.  (This does not include licensing of old Friends episodes. Those will be on HBOMax, along with Game of Thrones, by the way.)  Original content spend comes predominantly from just five companies: 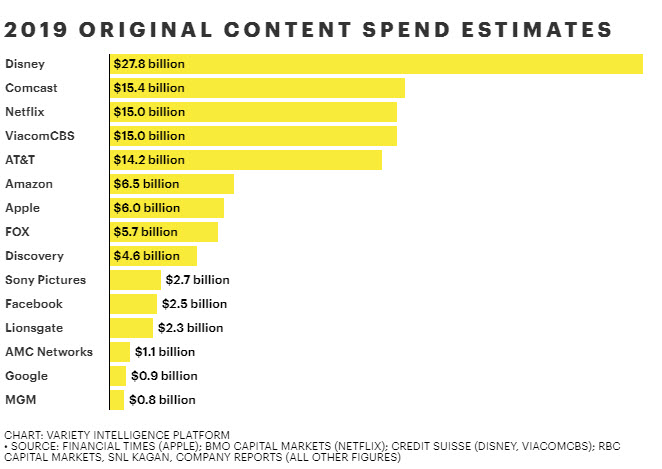 Your first thought might be that no one is managing this spend!  After all, everyone has heard stories of blown budgets and massive egos in Hollywood. But, as in every other corner of the economy, it turns out there are PE-backed companies managing much of this spend.  These are the “entertainment payroll providers”.  (Though they do far more than payroll these days.)

The cast, crew, directors, writers, and producers of a movie or show are W-2 employees of a production company.  They are generally not 1099 independent contractors.  As a result, a big portion of content spend is in the form of payroll.

Hollywood payroll spend is not just run by ADP.  It is highly specialized due to industry regulations, union rules, as well as state and local subsidies.  Two companies, among the handful of such specialized payroll providers, dominate the business.

Cast and Crew has been around since the ’70s.  The company offers payroll services, financial and accounting services, and workflow software.  In late 2018, EQT, a European private equity firm, purchased Cast and Crew from Silver Lake.  (A few years earlier, Silver Lake had bought the company from a smaller investment firm for a rumored $700 million.)  EQT intends to expand Cast and Crew beyond Hollywood. In early February, Cast and Crew announced it had agreed to purchase a competitor, Media Services.  Recently though, Media Services sued Cast Crew, claiming it was trying to void the deal due to the Covid crisis.  The two parties settled the lawsuit recently, and I think the transaction is going through, but I’m not sure!

Entertainment Partners has an even longer history in the industry via its subsidiary, Central Casting.  If you have ever heard Trump (or my Dad) say, “He looks like he came out of central casting”, now you know where the term came from.  It’s a real company that has been around since 1925 providing background actors to movies and TV shows. (You cannot make this stuff up.) Entertainment Partners also offers payroll services, incentives management, residuals management, and production software.  TPG Partners bought the company in 2019 from its employees.    Since then, the company has been acquiring and expanding, completing two acquisitions in 2020 just before the crisis hit.

Both firms have expanded well beyond payroll into financial and accounting software as well as workflow and video management software to assist in production.

You would not normally think of the movie business as being PE-friendly.  But remember the risk is in any one production, not in total spend on original content.   (At least that was until Covid came along and halted the content wars.)  Both firms are hurting right now.

What About the Non-Payroll Spend?

Payroll is only part of the story of creating a production, there are many other expenses.  I’m guessing 20-30% of the $120 billion ($30 billion?) is spent on non-payroll items  These include:

One really interesting company that manages some of this non-payroll spend is called Cashét.  Cashét smartly helps production companies with their accounts payable management.  Cashét also offers procurement cards that integrate with the industry’s leading financial systems, some of which come from Entertainment Partners (of course).

One of the companies whose board I’m on, Eved, manages non-card payments for the meetings and events industry is also getting into this market.  As you can imagine, film production looks much like a specialized form of meeting or event. It’s temporal, complicated, service-intensive, and card acceptance, along with the limited data provided by a card, may be inadequate.  (A customer of Eved’s also happens to be a big content developer.)

Once a film is shot, post-production begins.  This consists of editing the film, adding the soundtrack, fixing issues that need re-recording, adding visual effects, color grading, and many more steps.  It’s a lengthy collaborative process that can now be completed in a shelter-in-place environment using SaaS software.  One of the providers of this software, Frame.io,  is backed by savvy investors at Insight Partners.

Post-production work continues, but the core activity of filming new content is largely shut down.  Let’s hope the content wars resume soon, we are running out of reruns!