This post is a little late in coming, as Payoneer announced it was going public in early February.  It took me a while to turn my attention to this one.  In addition, as with any SPAC, it takes a little more digging to find detailed financial information.  As with my other IPO reviews, I’ll stick to describing the business and underlying economics.  I’ll let others handle the analysis of valuation.

What does Payoneer Do?

Payoneer “connects and monetizes two-sided networks”.  In practice, this means Payoneer helps marketplaces make mass payments to millions of small, global businesses who are suppliers on these platforms.  Payoneer then helps these SMBs get paid by offering them a multi-currency account and an increasing array of financial services, including working capital.

These two slides from the investor presentation do the best job of describing Payoneer’s offering to marketplaces and SMBs respectively: 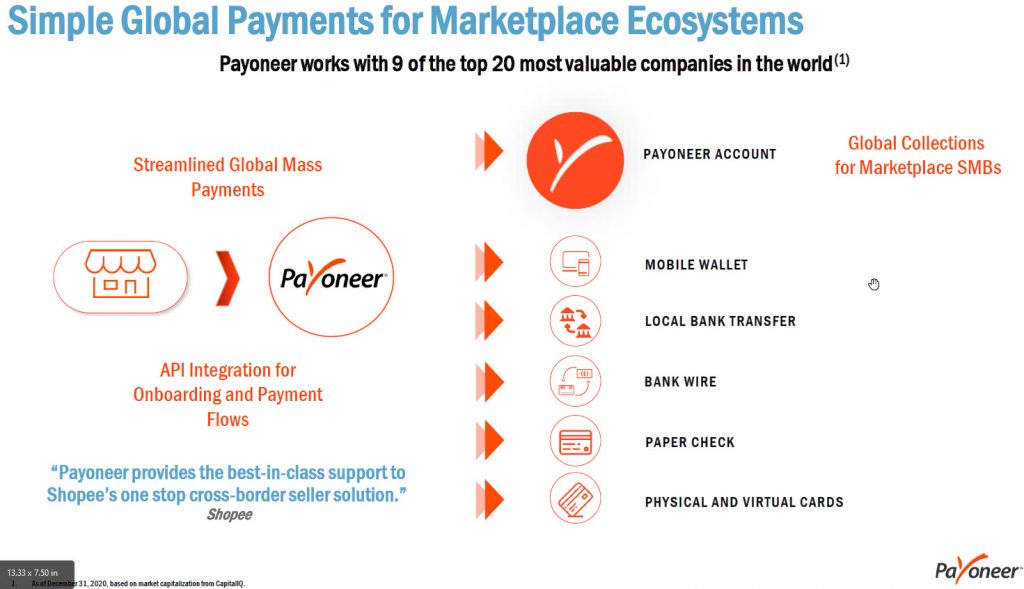 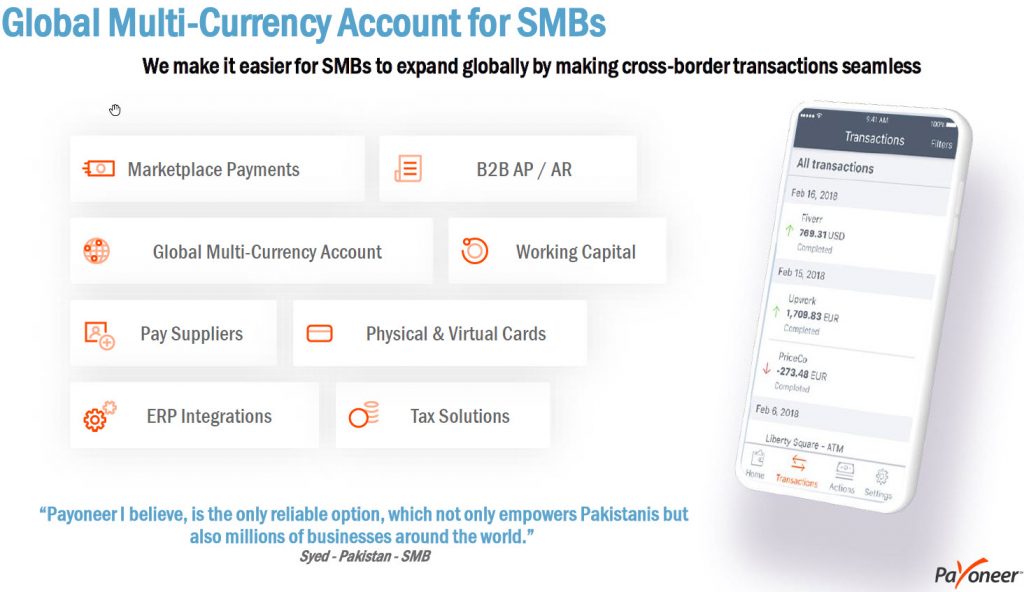 Marketplaces that make payments using Payoneer (at least as an option) include Amazon, Wish, Fiverr, Upwork, AirBnB, and eBay to name just a few.  Payoneer’s SEC filings indicate that payments received by Amazon marketplace sellers represented 29% of Payoneer’s revenue for the year-ended 2020.

The Chicken and the Egg Problem

Like any “two-sided market” Payoneer had a “chicken and the egg problem”  when it started.  It needed marketplaces to use it for making payments and it needed suppliers to accept it to get paid.  Clearly, Amazon and some of the other marketplaces were critical in solving that problem, but Payoneer must have also done a great job in China, India, Pakistan, and many other countries on-boarding SMBs–which could not have been easy!

The company started in 2009 and its payment volumes did not take off until 2015! 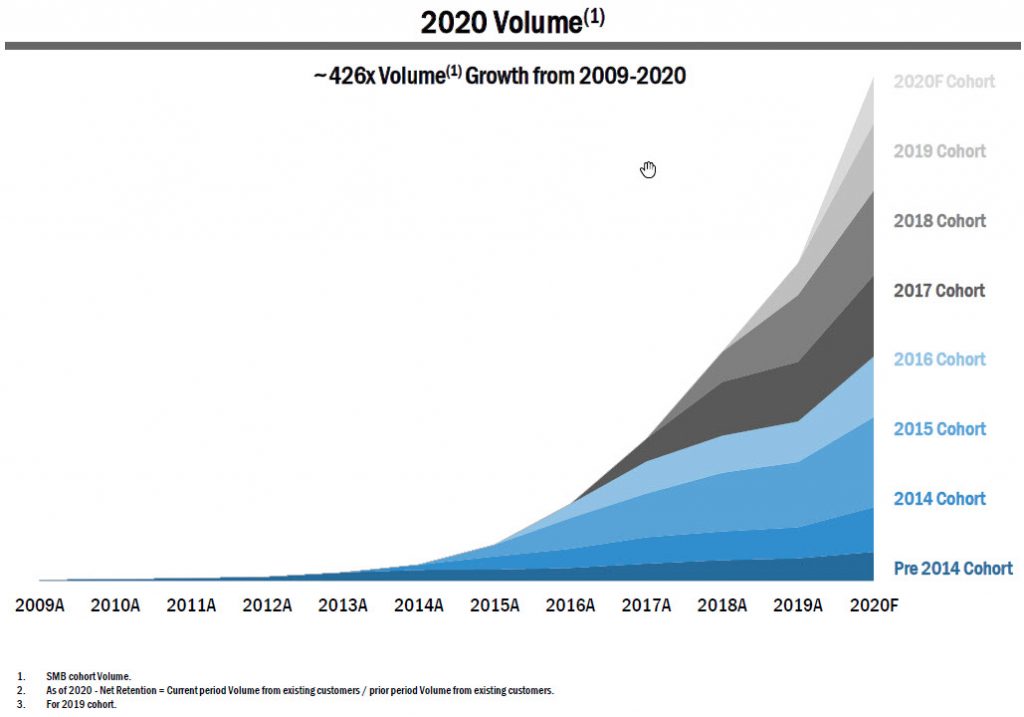 Which Side Pays Payoneer?

The SMBs “pay most of the freight”, but it is hard to nail down exactly how much.  Payoneer reports as one segment and does not break out revenue from the buy-side versus the sell-side.   Payoneer’s CEO does say “the vast majority of revenue” comes from the SMB side of the business.  This makes sense, as the marketplaces need to offer many payment options and have tremendous negotiating leverage.

For SMBs, on the other hand, Payoneer offers an immediate on-ramp into payments from marketplaces around the world.  Payoneer essentially enables SMBs to participate in the global economy and specifically on these giant platforms.

Payoneer tells us “we earn fees when”:

As you can see, SMBs dominate this description.  We also know Payoneer’s largest customer contributed only 5% of revenue in 2020.  This is a lot lower figure than the 29% represented by Amazon’s suppliers. Finally, we know that China accounts for more than 1/3 of revenue, again consistent with suppliers paying.  Amazon may be a lynchpin customer, but it is not the buy-side that drives the business.

Payoneer highlights growth opportunities from the SMB side of the business:

Payoneer is already helping SMBs with their AR and is now moving to AP, so they have the whole cash flow picture.  One could easily imagine Payoneer acquiring one of the many financing companies that provide loans to the Amazon or Shopify ecosystems, such as Seller’s funding, Yardline Capital, Uncapped Finance, or many others.

“mainly consist of fees paid to the banks, processors and networks that process payments to and from the Payoneer platform, costs to acquire currencies, card supply costs and losses related to certain of the Company’s services. These costs are net of any rebate programs with banks and processors, such as volume rebates.”

As a result, Payoneer reports a non-GAAP measure of its transaction profit, which is revenue minus transaction costs.  If we divide transaction profit by total payment volumes, we get to sort of a “net take rate”.  For the quarter ended March 31, transaction costs were about 15 bps, so the net take rate for Payoneer is 63 bps.  It’s a pretty attractive take rate, though a lot of hard work was involved in getting that flywheel moving!  (Remember, from the last post, that Marqeta’s take rate was about 40 bps. Take rates associated with cross-currency transactions are always higher.)

For the quarter, Payoneer’s revenues grew 23% over the prior year and non-GAAP adjusted EBTIDA was about 7%, so it was a Rule of 30 company.

More than 10 years ago, Payoneer set off on a seemingly insurmountable task.  Its success, surrounded by a sea of giants, is a tribute to ingenuity, persistence and, I bet, perseverance through some pretty tough times.

It will be fascinating to see Payoneer’s valuation.  The company is at the confluence of e-commerce, payments, and marketplaces, all of which are red hot.  But its modest growth rate relative to many of the other players in those markets and the fading SPAC mania may diminish some enthusiasm.