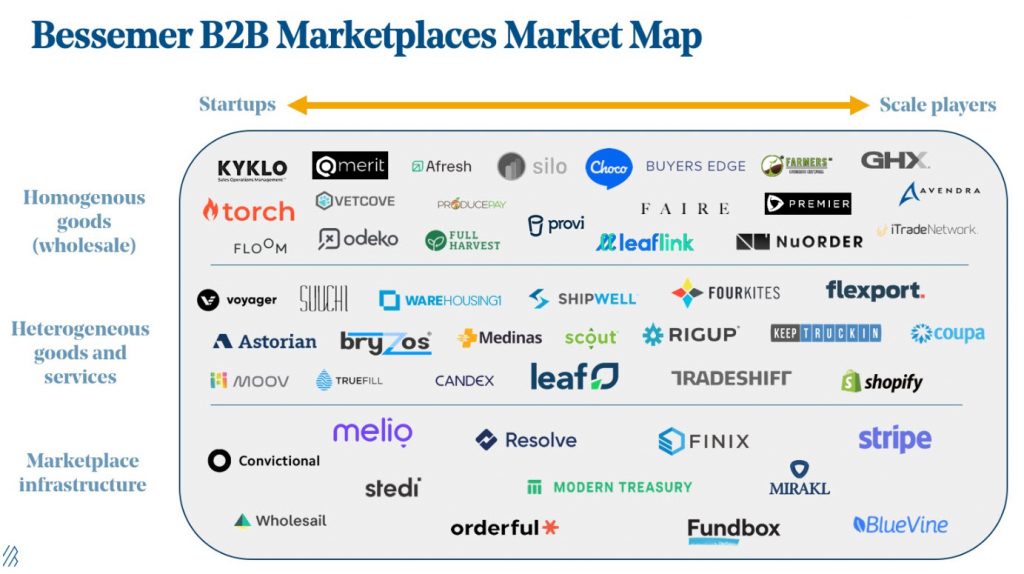 The event had a long-time industry observer like me reflecting on how far B2B Marketplaces have come in the past 20+ years.

A B2B marketplace is not a series of co-hosted one-to-many portals (e.g., Shopify).   Nor is it an application that automates transactions between known buyer-supplier pairs.  (That’s true for me even if the application is architected as a platform or network).  EDI networks, for instance, are not marketplaces.  Not much controversy there.  But, this definition also means the Ariba Network and the Coupa Open Business Network are not marketplaces.  That’s not to say that both of these products don’t have network effects or some marketplace functionality, they do.   But being a marketplace is not their primary purpose.

In March of 2000, Ariba closed on its acquisition of Tradex, a marketplace platform, for $1.9 billion in stock.  Later that fall, Ariba introduced updates to its two marketplace products, dubbed AMNE and AMSE–it’s a long story.  Less than 1 year later, Ariba discontinued investing or selling either of those products.  (By then I called the two products amnesia.) Ariba chose, instead, to focus on its procurement products and eventually its network.  That decision–now called a “pivot”–along with moving to the cloud, and monetizing the network allowed Ariba to ultimately survive and thrive.  CommerceOne, on the other hand, stuck with marketplaces and was out of business by 2004.  (For a complete history, see here).

From 2001 until 2013, I tried never to use the term “B2B Marketplace”.  The term was anathema to clients and anyone who lived through that era.  I still call marketplaces “Matchmakers” just to avoid the term marketplace.  B2B Marketplaces are simply one of the hardest types of B2B platforms to pull off for reasons I discuss here. The good news is that it now seems safe to wade back into the marketplace waters.

Why might B2B Marketplaces have success this time around?  The answer is easy.  Everything has changed.  I like to use the analogy of my two fantastic daughters who were in ages 5 and 8 in 2000.  Speed ahead 20 years and they are fully functioning adults each making their own way in the world quite successfully (god willing). But back then, while they were really, really adorable (they still are), they were totally useless and unproductive members of society.  The same was true of most, though not all, early marketplaces.

Specifically, here’s what is different now:

In 1999, Amazon sellers sold $100 million in volume on the marketplace, representing 3% of GMV.  Now the marketplace part of Amazon, alone, is $100 billion in GMV. 1000x growth is noticeable!  All that marketplace marketing by Amazon made consumers and businesses familiar with the concept.  Amazon paved the way an may have forced many to follow.

Marketplaces at Bessemer’s Conference and Beyond

Bessemer’s conference introduced me to several B2B marketplaces (see above) I had never encountered, as well as an ecosystem of providers ready to provide these B2B marketplaces with services.  Among the revelations were:

There are, of course, B2B Marketplaces in contingent labor, logistics, online advertising, the public sector, used capital equipment, agriculture, and parts businesses, but it was great to see entirely new industries being penetrated with true B2B Marketplaces.  Maybe it is not deja vu all over again.